Freedom in Simplicity: Weaving on a Rigid-Heddle Loom

Author and designer Betty Davenport loves weaving on a rigid-heddle loom. Find out how she uses these simple looms to create incredible cloth! 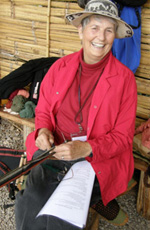 In my first class I learned how to make several textured patterns on the rigid-heddle loom using a pick-up stick. It was so easy. The unique feature of the rigid heddle is the hole-and-slot format. The warps going through the holes are controlled by the position of the heddle, up or down. The warps in the slots are passive. It’s basically a 2-shaft loom. But if you use a pick-up stick placed behind the heddle to pick-up selected slot warps, the pick-up stick acts as a third shaft, and it doesn’t interfere with the regular action of the rigid heddle. 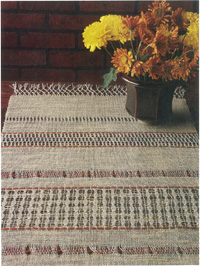 This so fascinated me that I continued weaving on my rigid-heddle loom even though I was also learning to weave on 4-shaft and then 8- and 16-shaft floor looms. I knew there must be more patterns possible on the rigid-heddle loom than the few I had learned in the class. Investigating this became the subject for my specialized study for the Handweavers Guild of America Certificate of Excellence. I wove more than nine yards of samples, and I’m sure there are more patterns to be discovered with this technique. 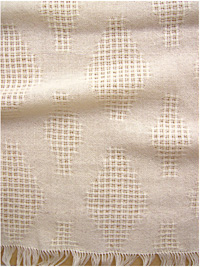 At one point, I wondered if I could weave some of my rigid-heddle designs on the floor loom. I had woven a stole in Bronson lace on the rigid-heddle loom, using a design on graph paper as a guide to where to insert the pick-up stick to weave the lace patterns. Out of curiosity, I wrote out the draft for the floor loom. Lo and behold! It would take more than forty shafts to duplicate the design on the floor loom! I was really impressed at what was possible on this simple loom.

Freedom in designing with texture and plain weave is fun with a rigid-heddle loom. I hope you’ll also explore its other unlimited possibilities.