How to Weave Great Towels with a Rigid-Heddle Loom

On the rigid-heddle loom, Susan E. Horton designs gorgeous towels and napkins that have all the drape and absorbency of a floor loom–woven towel but with much less time spent warping.

The Tarahumara Corn Towels by Jodi Ybarra from the Summer 2020 issue of Easy Weaving with Little Looms use a combination of 5/3 cotton and Ashford Caterpillar Cotton in the warp, both sett singly at just 10 ppi. Photo credit: George Boe

Since this article was first written, much has happened. First, Susan E. Horton went from Handwoven and Easy Weaving with Little Looms contributor to Handwoven editor. Second, new cotton and cotton-blend yarns designed with the rigid-heddle weaver in mind are now readily available. So here’s the original article, with a few updates added to help you weave the best towels possible on the rigid-heddle loom. If you have a favorite towel yarn not mentioned here, let us know at [email protected] —Christina

There persists a myth about rigid-heddle looms: that while they’re great for weaving scarves and pieces with thick knitting and fashion yarns, one can’t weave fine fabrics using traditional weaving yarns on them. Fortunately for us all, weavers the world around are proving this false by weaving beautiful, fine fabrics on these versatile little looms. Susan E. Horton is one such weaver.

Susan began weaving about 20 years ago on a multi-shaft loom, and through the years, she has made a name for herself in the weaving community with her keen eye for color and technical prowess. In 2013, Susan was asked to teach a class on weaving with the rigid-heddle loom. She agreed, even though there was one problem: she had never actually used one. She borrowed one from her guild, taught herself using videos, and was instantly smitten. “For me it’s the flexibility—the ease of it,” Susan explains. “You have so much less time invested in the beginning start-up, more freedom for experimentation—I will even sample things that I don’t think will work just to see what will happen.”

One of those experiments included designing and weaving towels using traditional weaving yarns. “I wanted to see what its capabilities were,” Susan said. “It bugged me that no one ever seemed to use weaving yarns on the rigid-heddle loom. I have this whole closet full of weaving yarns. Why can’t I use some of it?” Since those first experiments, Susan has designed and woven many towels on the rigid-heddle loom and has plenty of advice for other weavers who want to do the same. 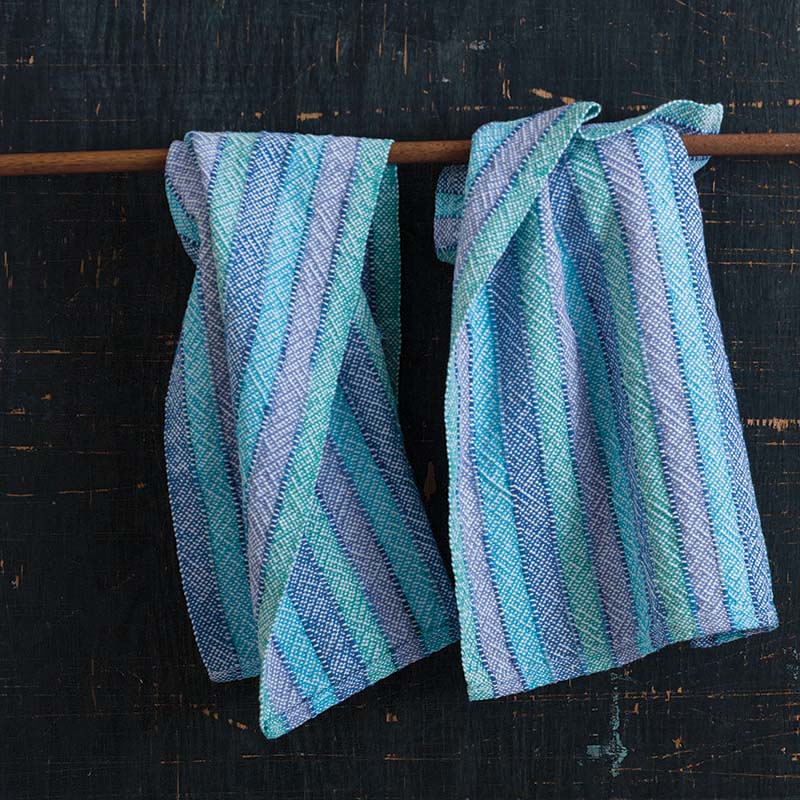 Jodi Ybarra’s Down by the Lake Towels (Easy Weaving with Little Looms 2016) use 8/2 cotton doubled in the warp and weft.

One of the most important aspects of any weaving project is picking the right yarn. Susan prefers 8/2 cotton, a weaving yarn commonly used for towels, napkins, and other table linens. She loves 8/2 cotton because it’s durable, absorbent, and inexpensive, and comes in a rainbow of colors. It’s a finer yarn and is typically sett at 18 to 24 ends per inch, quite a bit higher than most rigid-heddle reeds. Getting the sett right for towels is important: if the sett is too high, the towels will be dense, stiff, and less absorbent; if the sett is too loose, the fabric will have holes and threads that move around and can easily get caught (also known as “sleazy” fabric).

Susan gets past the problem of sett by using a trick she learned from a friend and fellow weaver: she uses two threads of 8/2 cotton in each slot and hole of a 12-dent reed to get a sett of 24 ends per inch. She says that although she has tried this only with 8/2 cotton, she thinks an 8/2 or 22/2 cottolin would also work at this same sett and could even be paired with 8/2 cotton.

Another choice would be to use a cotton yarn designed for the rigid-heddle loom. Ashford’s Yoga Yarn, for example, has a nylon core surrounded by 2 plies of cotton. The nylon allows you to get better tension on your rigid-heddle loom and also lightens up the yarn. Double up Yoga in a 7.5- or 8-dent heddle to weave sturdy towels. Beam from Gist is another excellent choice for the warp, doubled or single. This 100 percent cotton yarn is a 3/2 cotton, but unlike more traditional 3/2 yarns, it’s unmercerized, making it that much more absorbent. Sett it similarly to the Yoga Yarn for plain weave.

Don’t want to double up your yarn? There are a few yarns designed to be both light and thick so you can weave up towels without the extra weight. Ashford’s Caterpillar Cotton, for example, is spiral plied, meaning it can be sett more densely than other yarns of a similar weight. Sett this yarn anywhere between 10 and 12/12.5 epi. Similarly, both Mallo and Beam yarns from Gist can be used singly as warp on the rigid-heddle loom to weave sturdy, thirsty towels. The Mallo is a cotton slub yarn that can be sett at 12 for plain-weave towels. Similarly to the Caterpillar cotton, the slubs give the yarn more bulk with less weight.

For the weft, rather than doubling up the 8/2 cotton, Susan often uses a single thread. This not only gives her a better hand, it also lets her create bold stripes in the warp that would normally be obscured when weaving balanced plain weave. For those who want to weave a color-and-weave pattern that requires a balanced sett, doubling up the 8/2 cotton in the weft works just fine, too. The fabric will be slightly denser, but not too much. You can also use any of the rigid heddle–specific warp yarns mentioned in the weft singly without a problem.