Sometimes what you get from a course isn’t part of the course.

Like many weavers, I am almost always alone when I weave. Sometimes I fully relish the solitude and quiet, and other times, such as during a long repetitive treadling sequence or threading, I look for music or a podcast to listen to. With part of my brain engaged in the weaving and the other in the sounds around me, time passes quickly and enjoyably.

Lately, I’ve been getting into watching weaving videos as I weave, which to many people may seem redundant in a “bringing-coals-to-Newcastle” kind of way, but for me, it’s a bit like having a weaving workshop come to me, in my studio. It even works when I’m designing. I’m currently working on a baby blanket design in Fiberworks. As I mess around with huck tie-ups and thread counts on one screen, on the other I have Sara Bixler talking about color-and-weave while she weaves on a rigid-heddle loom.

It’s partially just the comfort of another voice in the room, but it’s also the comforting sound of weaving that I enjoy listening to and even looking up to watch being done from time to time. Sara has a very measured consistent way of weaving that I love. When I taught weaving, I told my students that if they tied a group of warp ends onto the front beam in a certain way, they should do the same for all of the other groups, and if they wound their warp rocking side to side for one color, they should do the same when winding the other colors, and so on. There are many more examples in weaving; it is a repetitive process in nearly all aspects, and because of that repetitiveness, consistency is the key to success. 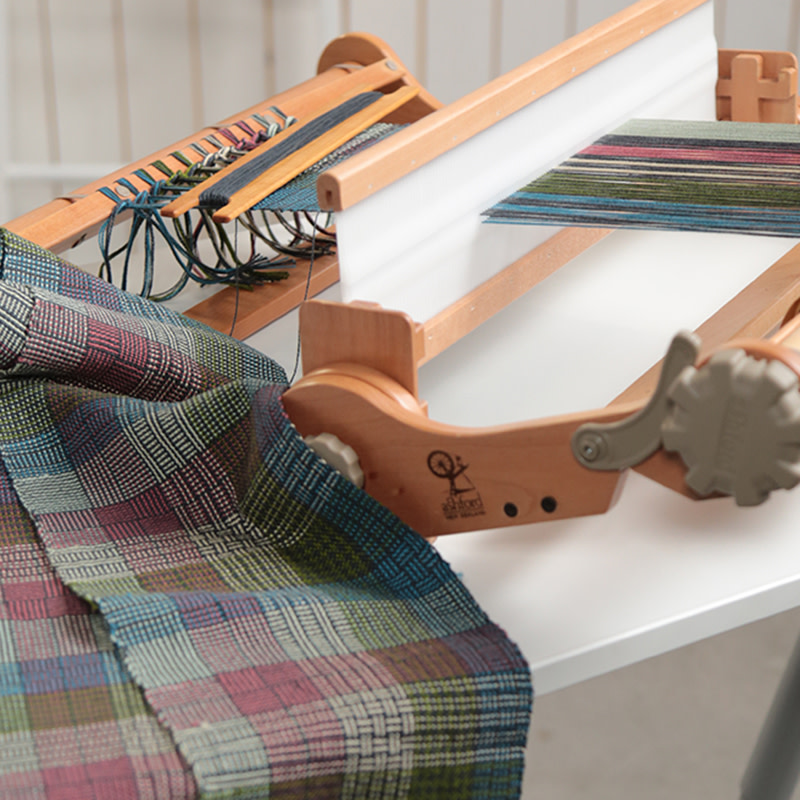 Not only do I find the sound of the weaving soothing, I find this gamp style scarf with its subdued color-and-weave patterns quietly beautiful.

Not long ago, I wove a runner on a rigid-heddle loom and was frustrated with an inconsistent beat and weaving rhythm. Then just a couple weeks ago, while watching Sara beat her weft, I noticed that she beats three times, every pick, in quick soft taps, and smoothly uses stick shuttles as she weaves. Since my beat is steady on a multishaft loom, I felt my inconsistency could be partially because I was using stick shuttles but didn't use them as well as Sara does. For me, stick shuttles are useful for certain projects such as rep weave, but unwinding them as I weave puts my rhythm off in comparison to boat shuttles and bobbins. On my next rigid-heddle project, I switched to a boat shuttle and sure enough, weaving went more smoothly, my selvedges were much improved, and my beat evened out.

Just as many times what you learn from a workshop isn’t necessarily what was being taught, Sara reminded me of the importance of consistency in weaving, and that led me to look for a solution outside of the realm of the course. Check out her Color and-Weave on the Rigid-Heddle Loom course. I think you’ll find it not only educational and inspiring, but also repetitive, in a good way.

Sara Bixler has been one of our cherished contributors for a while, and there are very good reasons for that.